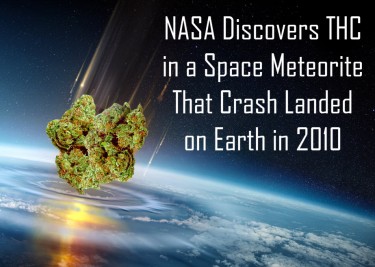 We knew that some good pot can make you feel like you’re floating on clouds, but we had NO idea that THC could actually exist in space!

Yes, we said that.

Astrophysicists from the University of Hawaii actually found trace amounts of THC, the main compound in cannabis responsible for its psychoactive effects, on a meteorite somewhere in the Nevada desert last 2010. They were working on the analysis of several meteorite parts looking for microbial data accidentally ended up finding THC too. Yes, it’s shocking but real!

It’s the first study of its kind, successfully documenting the existence of a psychoactive organic compound that originated outside the atmosphere of the Earth. The study was also partly funded by a NASA grant, though it’s significant since it could have revolutionary changes of how we perceive psychotropic agents as well as its origins.

“These findings will have a profound impact on the science of astrobiology as a whole,” explains head astrophysicist of the team, James Hun. “If psychoactive elements are found outside of this planet’s atmosphere, what does it say about the rest of the universe? If these chemical substances, that change brain functions and result in alterations in perception, mood, or consciousness in mammals as well as humans, find their origin in outer space, what role then has cometary impacts played on the human species? Or on life on the planet as a whole? This discovery ultimately leaves us with more questions than answers,” Han says.

“It also gives a whole new meaning to the term getting high,” he disclosed to reporters.

In 2009, THCV was also found on a meteorite by University of Mexico researchers. However, the discovery was dismissed due to the “controversial nature of the discovery.”

So Can Cannabis Live In Outer Space?

Well, we’re still trying to learn about it. Certainly it hasn’t stopped companies from trying to explore this idea.

In 2019, Front Range Biosciences announced that they were embarking on a mission to send samples of hemp as well as coffee tissue to the International Space Station in order to observe how zero gravity would change their gene expressions. For the mission, they partnered with SpaceCells USA Inc. and BioServe Space Technologies. From the University of Colorado Boulder, they’ve been monitoring the environmental conditions and sent the samples back to earth after the incubation period has been completed.

The Front Range Biosciences researchers have been busy growing and regenerating the tissue cultures, further studying the plants to examine the impact of zero gravity environment and its unique stressors on the samples. Front Range Biosciences CEO Dr. Jon Vaught says it can take up to 24 months to grow viable plant material from the cultures, and they aren’t sure what they’ll be finding.

“This was really the first experiment on coffee and hemp plant cells like this, so it’s definitely what I would consider an early-stage research project, meaning we’re not sure what we’re going to see,” Vaught explained to the Cannabis Business Times. “We’re trying to cast the net wide and see what happens to the underlying biology of these plants in this format, when they go into zero gravity and its space environment, in low orbit, where the Space Station sits.”

Vaught’s team are specifically looking for changes in the plants that were caused by stress, as this happens when plants are removed from their habitat, and no longer have access to nutrients, light, and water. Once this happens, the plants produce unique genetic markers.

“What we’re hoping is that it will give us a better understanding about how some of these genes turn on and off, which genes turn on and off, and how we might be able to use those in terms of breeding targets for our program,” Vaught explains. “We’re hoping that it will inform some of the targets around things like drought tolerance… or nutrient deficiencies by understanding how the plant responded in this high-stress environment… We can look for advantageous traits in plant varieties, which is part of our breeding program.”

Vaught also adds that the plants may have mutations, observed after they’ve regenerated completely. “It’s not a high probability, but we may see some plants that have strange mutations that happen as a result of this experience, so we’re trying to understand what those are.”

It’s not the first time that researchers have expressed a curiosity as to what happens when plants are sent to space, though it’s the first time we could learn of what happens to hemp plants. “Gravity’s effect on plants is that their roots grow down into the ground to search for nutrients and water, and the plant has to fight gravity to stand up and do what it does,” he says. “If you put plants in that unique environment, all of a sudden, the plant doesn’t have to fight gravity anymore, so it can put its energy into other biological processes. That really drove what we’re trying to do here.”

They are also working on sequencing the plants and he hopes that the tissue cultures could grow into real plants. “Our company is focused on figuring out how to develop and grow these plants in a wide range of environments, and the most extreme environment would be outside of the atmosphere in space, in zero gravity,” Vaught explains. “As a lot of our scientists put it, it’s the most remote location we have for our field trial program, and I think it’s an exciting area of research that we want to continue to explore.”

It’s an extremely exciting time to live in, to say the very least! We’re pretty thrilled to see what they come up with.

ASTRONAUTS EATING CANNABIS – IS THERE THC IN SPACE FOOD? 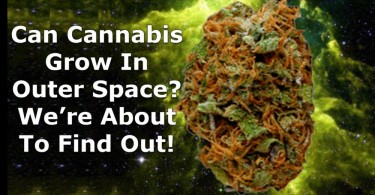 CAN YOU GROW MARIJUANA IN OUTER SPACE, THEY ARE CHECKING!