CANNABIS CULTURE – Pristine lakes, gentle waterfalls, sun-kissed mountain tops, and thriving conifers are some of the natural beauty that shine out through the work of painter, Rocky, from Denver, Colorado. Rocky’s chooses bright colors for his palette conveying the warm, familiar feeling of stepping into his world on a gorgeous autumn day. But Rocky did not always paint, and his work was not always so bright.

In 2013, Rocky received the devastating news that he had colon cancer, which is a malignancy affecting the large intestine.  By the time it was caught, it had already metastasized to the liver requiring chemotherapy, liver ablation, large bowel resection due to infection, and more.  Treatments were harsh, and pharmaceuticals were harsher.  Narcotics, pain, and depression bred more of the same, until Rocky found himself bedridden, severely depressed, unable to find the strength to even eat, and addicted to painkillers that began to slowly destroy his kidney function.  There was a disconnect upon diagnosis, a feeling as though he was no longer a part of this world, but of something foreign and entirely consuming.  However, one day while lying in a hospital bed, Rocky looked up and saw a painting of cotton.  This simple yet moving piece touched something in him.  He saw a beauty that inspired him to want to create beauty of his own, but he was still very limited by his pain and the pharmaceuticals his body had come to rely on, and at first his paintings were a dark reflection of his muted spirit.

Rocky’s children saw their father slipping away.  They saw his addiction, both to pills and cigarettes, and knew that something had to be done.  Luckily, Rocky’s eldest son had been educating himself on the use of cannabis in cancer patients for pain control and pharmaceutical reduction, and on his son’s loving recommendation, Rocky tried smoking some flower.  Little did he know how much this would change his life and combine with his new artistic outlet to give him a joy he had not believed he could achieve after diagnosis.

Clinical trials of the cannabinoids present in marijuana have been proven to assist in many symptoms associated with cancer care, including nausea, vomiting, weakness, depression, and pain, without the damaging side effects of strong opioids.  Once being introduced to cannabis, Rocky saw a dramatic change in his life.  He was able to reduce his painkillers down to occasional acetaminophen, slowly found himself able to eat again, and found life was becoming more bearable.  Painting gave him an “adrenaline rush of peacefulness,” and marijuana was changing his paintings to reflect this new path his life had taken.  He was able to step outside of his illness and see the world as a source of beauty instead of pain, and this brought him a serenity he would then transfer to canvas.

Unfortunately, one of the barriers Rocky initially faced on his journey was legalization.  At first, he did not live in an area where he could safely and lawfully purchase and consume marijuana.  Despite seeing the drastic improvement in his quality of life and having the full support of his family, there was the constant anxiety of being caught.  Doctors continued to stress the benefits of outdoor activity on his physical and mental health, but fear of being a known pot smoker kept him inside.  Medical marijuana was still considered taboo among his primary care physicians, and an alternative to traditional pharmaceuticals was not offered.  Legally available at the time was Cesamet (nabilone), a structural derivation of THC, and Marinol (dronabinol), a synthetic cannabinoid.  However, both medications came at a high cost, had a slow onset, came with a plethora of potential side effects, and neither had the same effect on treatment-related symptoms that even low-grade flower could offer.  Prescribed oxycodone and morphine would allow him to go outside, while slowly killing everything he was, and marijuana was giving him back control of his life, but was isolating him even further.  Luckily, Colorado was among the first states to legalize recreational.  Suddenly medical-grade flower, edibles, and other avenues of consumption were readily available.  There was no more need to hide who he was.  Rocky was now empowered and ready to take his life back through legal cannabis and artistic expression. 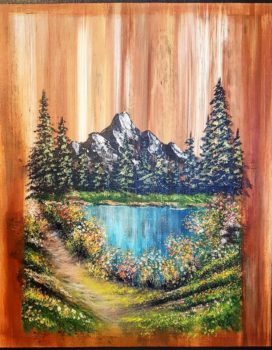 Along with the legalization of recreational marijuana use came fun and innovative new opportunities, such as Sensi Nights, which combines local businesses and crafters with performances, education, music, food, and art, with the common theme being the celebration of cannabis culture.  Events like Sensi Nights allow like-minded people to connect and share their stories, and often times this sharing and camaraderie can lead them to finding hope and beauty in the reflection of their surroundings and the community that makes up cannabis appreciators and advocates.  Rocky has been invited to participate in these lively events twice now, and they have been standout points in his life.  Never before had he painted in front of an audience, so he felt motivated to really put his whole heart into his work and make something that he and others could really speak to at an ethereal level.  He was able to take that next step in his growing and evolving thanks to legalization and being unafraid to put himself out there and pursue his happiness.

While there have been so many vast improvements along the way, Rocky must still face the return to pharmaceuticals when he faces surgeries and other cancer-related treatments as he is unable to smoke or ingest marijuana while an inpatient.  Battling addiction to these powerful drugs is daunting, and using them again means re-weaning himself off of them again.  However, Rocky finds strength in knowing that he now has resources at his disposal.  He has a supportive wife who has been by his side every step of the way, he has children who love him and have taken an active role in his recovery, and now he has cannabis and painting to keep him propelled forward toward healing, recovery, and peace.  The cancer is still there, but it is no longer the all-consuming entity in his life.  It can no longer steal away his appetite, energy, and desire to lead an active and fulfilled life.  Cancer cannot stifle his voice, his creativity, his soul.

Nowadays Rocky’s work reflects much more of the positive energy that flows through him.  He has stripped cancer of its power and handed it over to Mother Nature and sativa strains, and in that found his paintings significantly impacted.  Cancer does not exist in the places that Rocky is when he creates.  There is only peace and light.  He has found his calm. 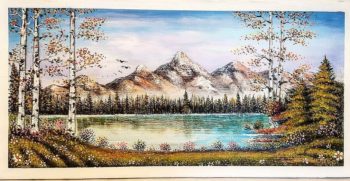 More than anything, Rocky wants people to connect to his artwork on a deeply personal level just as someone else’s art once connected to him.  He has so much gratitude for the way his life changed for the better and for those who have supported him along the way.  There is a strength and power in creation, a healing in artistic release, and being able to share this with others through social media and painting events has been a truly blessed experience for him.

Rocky’s story is an inspiration.  His sharing of it has proven to be a beautiful example of someone who has created something magical in the face of extreme adversity and overcome.  His bravery and open-mindedness in the face of cancer allowed him to find a path to healing and a release from the deadly grasp of heavy narcotic addiction.  He opened his heart to nature in its multiple forms, and in this he found himself again as a husband, father, and grandfather, and individual.

Some of Rocky’s artwork is currently on Instagram @rockypaintings and is also found on Etsy and Amazon.

Rocky’s current goals are to transition from acrylics to oil-based paints, to make a piece larger than anything he has made to date, and to travel in search of inspiration.  He hopes to be able to fund this endeavour through the sales of his work, and his children have also set up a GoFundMe page for him and his wife:  https://www.gofundme.com/f/my-father-the-cancer-fighter-amp-painter

Study Suggests Women May Be More Sensitive To THC Than Men
What is the Environmental Impact of Cannabis Farming?
Hemp-CBD as Medicine for Kids, Agree or Disagree?