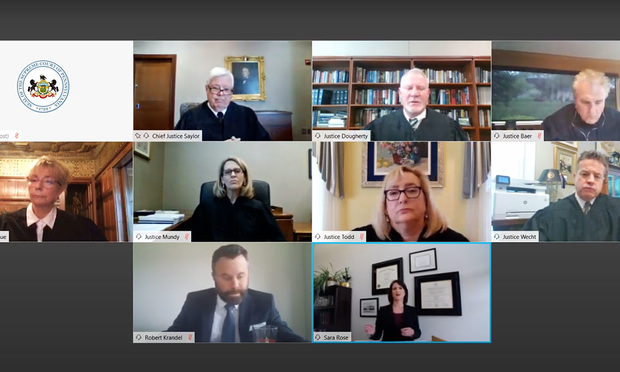 Pennsylvania Supreme Court’s May 19, 2020, arguments during its morning session via videostreaming. Image via YouTube

A central Pennsylvania county’s policy barring people on probation from using medical marijuana violates state law and must be struck down, an attorney for the American Civil Liberties Union told the Pennsylvania Supreme Court during its first-ever livestreamed argument session.

The justices on Tuesday heard arguments in the case, captioned Gass v. 52nd Judicial District, Lebanon County, in which the high court exercised its plenary, or King’s Bench, jurisdiction. The case asked the Pennsylvania Supreme Court to address whether probation departments may bar probationers from using medical marijuana, which is legal in Pennsylvania.

The session was livestreamed over YouTube with attorneys keeping to a tight argument schedule and no noticeable technical difficulties.

Arguing for the ACLU, attorney Sara Rose told the justices that the policy violated the Medical Marijuana Act, which made it so people cannot be punished solely for the use of medically prescribed marijuana. According to Rose, the law, passed in 2016, granted sweeping protections for medical marijuana users and did not create exceptions for criminal history or probation status.

“It inserts a requirement of medical necessity that’s found nowhere in the act, and it strips them of the immunity by subjecting them to penalty,” Rose said. “That violates the plain and unambiguous language of the Medical Marijuana Act.”

However, attorney Robert Krandel of the Administrative Office of Pennsylvania Courts, who is representing the Lebanon County court system, said no one is not being penalized solely for their medical marijuana use. Courts, Krandel argued, need the power to bar a person’s medical marijuana use so the probation department can take a holistic approach and adjust if probationers suffer dependency issues.

“What they’ve essentially done is claim that the Medical Marijuana Act has built a wall around this part of their life, such that the court could never evaluate, under any circumstances, what’s going on with their health,” he said.

The argument session was a bit different than the court’s usual free-form style. Instead of having justices ask questions whenever they felt like it, Chief Justice Thomas Saylor went down the line of justices, based on seniority, giving each an opportunity to ask questions.

Although the session marked a first for the high court, it was not the first time a Pennsylvania appeals court has livestreamed its arguments. In late April, the Commonwealth Court took that step when it livestreamed a hearing over whether specialty wine vendors had to deliver special orders to state-owned liquor facilities first, or whether they could deliver the products directly to consumers.

During the questions portion of Tuesday’s hearing in Gass, Justice Debra Todd asked Rose why drug and DUI courts would have the power to bar people from drinking alcohol, but a probation department would not be able to bar people from using medical marijuana.

Rose argued that medical marijuana is distinguishable from alcohol, since there is no “sweeping law” allowing people to drink alcohol. The act, she contended, carved medical marijuana out of the Controlled Substances Act and recognizes it as a medical treatment that’s recommended by doctors.

Justice Max Baer asked Krandel whether, under his argument, a court could bar a probationer from treating with chemotherapy, if that treatment included the use of a schedule I drug. Krandel said under those circumstances the policy would allow for a hearing regarding whether the probationer should be allowed to continue with the treatment.

When asked by Justice Christine Donohue about what it would take for a probationer to prove medical necessity, Krandel said that, since the case was taken up on King’s Bench, there is no record yet about what that would look like. Donohue said that appeared to be problematic.

“If the district cannot tell a probationer what he or she needs to establish, isn’t that enough to, on its face, say this policy can’t stand? If it’s a moving target?” Donohue asked.

Ultimately, Krandel said the county’s policy was meant to mirror the law and work in concert with it, however, he said, rather than throwing the whole policy out, the justices could “offer input and help steer the policy.”